The chemist’s first choice for heterogeneous catalysts is often porous silica because of its high surface area. However, these surface areas are mostly due to the pores and are thus not always accessible. We have developed new kind of fibrous silica nanospheres. Such a fibrous morphology observed in these nanospheres has not been seen before in silica materials. The material exhibits excellent physical properties, including a high surface area, a fibrous surface morphology, good thermal and hydrothermal, and high mechanical stability. Its high surface area is due to these fibers and not pores (see below figure). KCC-1 will be very useful for silica-supported catalysts, wherein accessibility of active sites can be increased significantly. This project aims to improve the properties of KCC-1 by understanding its mechanism of formation as well as probing for various applications in catalysis as well as in gas storage.

Scanning electron microscopy (SEM) images shown in below figure (left) indicate that the KCC-1 material consists of colloidal spheres of uniform size with diameters that range from 250 nm to 450 nm. Close inspection of these images reveals that the material possesses dendrimeric fibres (angle shaped with thicknesses of 8-10 nm) arranged in three dimensions to form spheres, which can allow easy access to the available high surface area. Further structural characterization of synthesized silica nano-spheres performed by high-resolution transmission electron microscopy (HRTEM) (figure-right) reveals well-defined and ordered fibres coming out from the centre of the particles and distributed uniformly in all directions.

Although SEM and HRTEM imaging of silica nanospheres indicates the presence of fibers, it was not clear whether these fibers grow from the center of the spheres or they are only on the surface of the silica spheres with solid cores inside. The three-dimensional (3D) tomography study of KCC-1 indicates that the fibers grow uniformly from the centers of the spheres along the free radial directions and the restricted tangential direction to form fibrous spherical silica particles (see below video clip showing the results from the 3D tomography study).
The fabrication of KCC-1 fibrous nanosilica spheres involved microemulsion formation using cetylpyridinium bromide (CPB) or cetyltrimethylammonium bromide (CTB) as a template and urea in a mixture of cylcohexane, pentanol, and water. The silica precursor (TEOS) was hydrolyzed by urea, followed by assembly of hydrolyzed, negatively charged silicate molecules in the space available between the selfassembled template molecules  to aggregate along the free radial directions and the restricted tangential direction. Finally, condensation of self-assembled silicate led to the crystallization of the silica material within the isolated micelles (dispersed in the solvent), yielding fibrous silica nanospheres (see below video clip). However, the exact mechanism of formation of fibrous nano-silica remains a complex and yet unsolved problem. 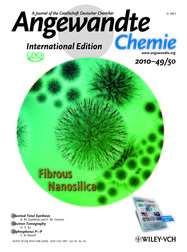 After our discovery of KCC-1 in march 2010 (US Patent, US20110253643), several reputed groups worldwide reported the successful use of KCC-1 for various applications such as catalysis, photocatalysis, CO2 capture-conversion, sensing, detection and extraction of ions, supercapacitors, drug delivery and other biomedical applications. Although KCC-1 nano-spheres possess unique textural and physical properties and show a dramatic enhancement in activity, control over their particle size, fiber density and textural properties (surface area, pore volume, pore size) has not been achieved yet, despite their being critical parameters for the successful development of KCC-1-supported catalysts/photocatalysts and sorbents as well as in drug delivery. Thus, there is an urgent need to develop a simple and sustainable protocol for the synthesis of monodisperse KCC-1 with controllable size, fiber density and textural properties.

We have now developed facile protocol for the synthesis of fibrous nano-silica (KCC-1) with controllable size and fiber density. In this work, we have shown that the particle size, fiber density, surface area and pore volume of KCC-1 can be effectively controlled and tuned by changing various reaction parameters, such as the concentrations of urea, CTAB, and 1-pentanol, reaction time, temperature, solvent ratio, and even outside stirring time. For the first time, we were able to control the particle size ranging from as small as 170 nm to as large as 1120 nm. We were also able to control the fiber density from low to medium to very dense, which consequently allowed the tuning of the pore volume. We were able to achieve a pore volume of 2.18 cm3/g, which is the highest reported for such a fibrous material to date.  Fascinatingly, we were even able to increase the surface area up to 1244 m2/g, nearly double the previously reported surface area of KCC-1. Thus, one can now synthesize KCC-1 with various degrees of size, surface area, pore volume, and fiber density.

Application of KCC-1 in Catalysis

Ru/KCC-1: A Sustainable Catalyst for the Hydrogenolysis of Alkanes with Good Catalytic Activity and Lifetime
We have shown that fibrous nano-silica (KCC-1) can serve as a suitable support for the synthesis of highly dispersed ruthenium (Ru) nanoparticles. The resulting KCC-1/Ru catalyst displayed superior activity for the hydrogenolysis of propane and ethane at atmospheric pressure and at low temperature. The high catalytic activity was due to the formation of Ru-nanoparticles with an active size range (1-4 nm) and the presence of hexagonal-shaped particles with several corners and sharp edges possessing reactive atoms with lowest coordination numbers. The catalyst was stable with an excellent lifetime and no sign of deactivation, even after eight days. This enhanced stability may be due to the fibrous nature of KCC-1 which restricts Ostwald ripening of Ru nanoparticles.

Ref: A. Fihri, M. Bouhrara, D. Cha, Y. Saih, U. Patil, Vivek Polshettiwar,* ACS Catalysis 2012, 2, 1425-1431
TaH/KCC-1: “Hydro-Metathesis” of Olefins
TaH supported on fibrous silica nanospheres (KCC-1) catalyzes a new hydro-metathesis reaction of olefins with remarkable catalytic activity and stability. Conversions remain rather constant and the TONs of the reactions increase steadily. This is the first time that such a stable catalyst with such a high TON (with a gain of one order of magnitude) has been observed in tantalum hydride catalyzed reactions. Furthermore, the catalyst proved to be quite regenerable and using it in a second run yielded similar or even better results than the first run.

Ref: Vivek Polshettiwar,* J. Thivolle-Cazat,  M. Taoufik, F. Stoffelbach, S. Norsic, J. M. Basset*, Angew. Chem. Int. Ed. 2011, 50, 2747-2751.
Pd/KCC-1: Suzuki Coupling Reactions Under Sustainable Conditions
Fibrous high surface area nano-silica (KCC-1) was functionalized with aminopropyl groups and was loaded with palladium (Pd) nanoparticles by treating the functionalized surface with palladium chloride, followed by hydrogen reduction. Transmission electron microscope (TEM) images revealed that fibers of KCC-1 were fully loaded with well-dispersed Pd nanoparticles (1-5 nm). The as-synthesized Pd/KCC-1 nanocatalyst was then evaluated for the Suzuki coupling of aromatic halides and was found to be active for a range of aryl bromides and iodides with aryl boronic acids in good to excellent yields. Notably, the catalyst was also active for aryl chlorides, which are difficult but more “sustainable substrates”. The catalyst was easily recovered from the reaction mixture and was reused for a number of cycles with negligible change in the catalyst activity, confirming the heterogeneity and good stability of this catalyst system. TEM images of the fresh and used catalyst showed that the palladium nanoparticles supported on fibrous nano-silica remained unchanged, indicating no significant Ostwald ripening. Thus, The KCC-1-NH2/Pd nanocatalyst synthesized by a simple protocol displays superior activity for Suzuki coupling reactions even with challenging substrates like aryl chlorides under sustainable ligand-free conditions.


Nitridated KCC-1 as a Base
We have developed a novel base by nitridation of KCC-1 and showed the advantages of its fibrous morphology and highly accessible surface area. Nitridated KCC-1 was found to be a very active and robust base for Knoevenagel condensation reactions of various aldehydes, even with challenging substrates. The as-synthesized catalysts also were highly active for the trans-esterification of esters with a wide range of alcohols and showed multifold enhancement in activity than the known catalysts. This enhancement in activity was explained by the presence of both basic (amines) and acidic (silanols) sites as well as excellent accessibility of these sites due to the open and flexible fibrous structure of KCC-1 (unlike MCM-41 or SBA-15), which helped substrates to easily penetrate and interact with basic amine sites and, in turn, accelerated the overall reactions.

​
Atomic Layer Deposited (ALD) TiO2 on Fibrous Nano-Silica (KCC-1) for Photocatalysis: Nanoparticle Formation and Size Quantization Effect
In this work we report the design and synthesis of high surface area photocatalysts by coating TiO2 on the fibrous nano-silica (KCC-1) using atomic layer deposition (ALD). Our developed catalyst showed extraordinary photo-catalytic activity, far better than well-known MCM-41 and SBA-15 supported TiO2 catalysts as well as other silica supported TiO2 catalysts reported in the literature till date. This work showed how one can tune the photocatalytic activity of supported TiO2 catalysts by simply tuning the morphology of the support. In addition to extensive characterization of materials using various techniques, comprehensive mechanistic insight for ALD TiO2 coating on KCC-1 fibers was gained using solid state-NMR and UV-DRS. For the first time, we also observed formation of small and monodispersed TiO2 nano-particles after heat treatment of these ALD coated samples of KCC-1. Even more fascinatingly, we observed size quantization effect in these TiO2 nanoparticles, which was confirmed by band gap shift measurement and Brus effective mass approximation method. We believe that the combination of unique textural properties and morphology of KCC-1, TiO2 nano-particle formation and their size quantization is the reason behind remarkable photo-catalytic activity of KCC-1/TiO2 catalysts.