Due to the increasing dependence on fossil fuels to meet our energy needs during the last few decades, the release of the greenhouse gas CO2 has increased exponentially. Approximately 33 billion tons of carbon in the form of CO2 was emitted into the atmosphere in 2010, and this trend is increasing every year. Due to rapid development worldwide, the energy demand is increasing. Unfortunately, there will be no significant change in the coming years in terms of the source of this energy, and fossil fuel will remain the major source for fulfilling this energy requirement.

Climate change due to excessive CO2 levels is the most serious problem mankind has ever faced. This is causing abrupt weather patterns such a flood and drought, and we already witnessed this in recent years. CO2 emissions need to be urgently reduced to avoid potentially dangerous climate change, which may not be reversible. Capture and conversion of CO2 to fuel and fine chemicals is one of the best ways to tackle the challenges of environment and energy together.

Therefore, there are extensive efforts underway to develop technologies that will allow fossil fuel to be used with reduced CO2 emissions. CO2 capture and sequestration using solid adsorbents have received extensive interest due to their good sorption capacity, stability, ease of handling and reusability. A wide range of materials, such as amine- functionalized silica, oxides, zeolites, carbon, polymers and, recently, metal organic frameworks (MOFs), have been used. 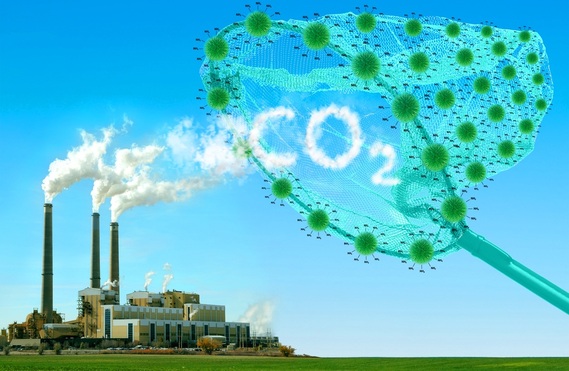 Design of CO2 Sorbents using Functionalized Fibrous Nanosilica (KCC-1): Insights into the Effect of the Silica Morphology (KCC-1 vs MCM-41)
Hybrid materials by functionalization of fibrous nanosilica (KCC-1) were synthesized for efficient CO2 capture, using various amine molecules by physisorption (ads.) as well as covalent attachment. Their CO2 capture efficiency was studied using various parameters, such as CO2 capture capacity, kinetics of adsorption, stability of the sorbent, and regeneration-reuse properties. The best KCC-1 sorbent (i.e., KCC-1-TEPAads) was then studied for effect of solvents, adsorption temperature and TEPA (tetraethylene pentamine) loading on its textural properties and CO2 capture efficiency and compared with their MCM-41 counterparts. Textural properties of MCM-41 sorbents was drastically affected with loss of more than 99 % of its surface area and pore volume, while KCC-1 based sorbents were able to retain good amount of surface area and pore volume. Notably, the KCC-1-based sorbents exhibited better CO2 capture capacity, rate of adsorption and stability, than its MCM-41 counterpart (MCM-41/TEPAads). The total CO2 capture capacity after 21 cycles under humid conditions was 91.5 mmol/gm for KCC-1-TEPAads but 73.1 mmol/gm for MCM-41-TEPAads, indicating the superior capacity and stability of the KCC-1-based sorbents even under humid condition.

​The better performance of the KCC-1-based sorbents was due to their unique fibrous morphology, accessible surface area and pore volume, which were retained even after functionalization. These results indicate the critical role of the silica morphology as well as the advantages of KCC-1 silica over MCM-41 for the design of efficient CO2 sorbents.
​

Silicon Oxynitrides of KCC-1, SBA-15 and MCM-41 for CO2 Capture
In this sub-project, three series of amino-functionalized materials based on KCC-1, SBA-15 and MCM-41 were prepared via thermal ammonolysis and evaluated as sorbents for CO2 capture. These materials appear to exhibit the following advantages over conventional amine-grafted silica:  1) good CO2 capture capacity; 2) faster kinetics, which will have a shorter adsorption/desorption cycle time and cause more gas to be absorbed in a shorter amount of time; 3) easy regeneration and efficient reuse of sorbents; 4) excellent mechanical strength, which will help to sustain the overall CO2 capture process; 5) high thermal stability in inert and oxidative environment, which will help these materials retain a good capture capacity even after several temperature swing regeneration cycles in an industrial environment; and 6) comparatively green material synthesis and less expensive production costs, which allows the overall process to be sustainable.


Shape & Morphology Controlled Synthesis of Cu, Co and In MOF with High CO2 Capture Capacity
In this work, we studied the effects of various surfactants on the shape and morphology of three metal organic frameworks (MOFs), i.e., Co-MOF, Cu-MOF and In-MOF, which were synthesized under microwave irradiation. The as-synthesized materials were characterized by X-ray powder diffraction (XRD), scanning electron microscopy (SEM), thermogravimetric analysis (TGA), and nitrogen sorption. The effects of microwave irradiation time, temperature, and surfactant template were investigated. The synthetic parameters, including the type of surfactant template and the reaction temperature, played crucial roles in the size, shape and morphology of the MOF microcrystals. We also evaluated these MOFs as sorbents for capturing CO2. Of the synthesized materials, Cu-MOF demonstrated the highest CO2 capture capacity, even at atmospheric pressure and ambient temperature.
Related Publications: